Tillandsias, also known as air plants, are a type of epiphytic plant (epiphytes) native to the tropical and subtropical regions of the Americas. Epiphytes grow or attach to host plants via their root systems to secure themselves. The term air plant refers to around 650 species of flowering perennial plants in the Tillandsia genus, all part of the Bromeliad family. In general, tillandsia is known for the ability to absorb water and nutrients through their leaves rather than their roots, thus their name. Some can also be grown in a traditional pot with soil, but they need to be watered more frequently and require more maintenance. One of the benefits of growing tillandsia is that they are easy, t plants that require limited attention; however, it is vital to ensure they get enough light. Most prefer bright, indirect light and can tolerate some direct sun. But be cautious in the amount, as direct sunlight can cause their leaves to burn. In addition to misting, tillandsia can be soaked in water once a week to provide the moisture they need. To soak your tillandsia, fill a bowl or sink with room temperature water and soak for about 20 minutes. After soaking, shake off any excess water and place the plants where they can dry completely. Be sure to get all of the excess water removed, as it can create rot.

Don't forget to feed your air plants
Tillandsia is an excellent plant for people looking for a low-maintenance option for their home or office. They do not require frequent watering or fertilizing. When you fertilize or feed your tillandsia, it is essential to use a specialized fertilization formulated for air plants. Most air plant professionals recommend fertilizing once a month. We offer air plant food (see below) at Green which is easy to use by simply mixing the recommended amount into a gallon of water and a your air plant to soak for 20-30 minutes. You can order online or purchase in our Hillcrest store. Here is a summary of the ten most popular Tillandsia varieties collectors own:

1. Tillandsia ionantha: This species is native to Central America and Mexico and represents the most significant number of varieties, including Guatemala, Mexico, Maxima, Rubra, Fuego, Fat Boy, Variegata, and Victoria. The most common and recognizable air plant, the Tillandsia ionantha, is small and has thin, green leaves that turn red when blooming. Ionantha is a bromeliad plant known as the sky plant because it has a short stem and grows in a tropical climate. They produce flowers toward the end of their lifespan and produce numerous offsets (baby tillandsia) in each bloom cycle. 2. Tillandsia xerographica: Labeled the queen of air plants, the Tillandsia xerographica has large, flat leaves and can grow up to 2 feet in diameter. Its lyrical shape and large size make it a centerpiece of most air plant collections. Tillandsia xerographica produces a spike that turns into a red or yellow flower. With long curling leaves that can grow to the size of a head of lettuce, the xerographic likes indirect bright light and can adapt to diverse climates. When soaking, shake out the excess water to avoid allowing water to retain in the base of the leaves, or it may rot. Place it next to a window if you place it indoors. This species is native to Mexico, Guatemala, and Honduras. 3. Wallindsia cyanea: Previously in the genus Tillandsia, this plant has been reclassified into the newly formed bromeliad genus Wallindsia. This species is native to South America and is known for its long, thin leaves that are blue-gray. Wallindsia cyanea are popular due to their bright pink blooming bracts and vibrant purple-blue flowers, giving it the alternative name as the pink quill plant. Part of the Bromeliad family, the Wallindsia cyanea can grow either in a container with soil or as an air plant. 4. Tillandsia bulbosa is named after its bulb-like appearance. It originates from Central America and thrives in humid conditions. If you live in a dry location, your plant must be misted every other day to thrive. It is a popular air plant that has waxy, curling leaves of green and many shades of purple. The long-bending leaves are like spider legs and give off a mystical, creeping appearance. Belize has leaves that turn red when it blooms to attract hummingbirds and pollinators. They grow to lengths of up to 8" long. 5. Tillandsia juncea: This species is native to Central and South America and has long, thin, brown leaves. It is a large epiphyte reaching up to 50 centimeters in height. It has many supple, silver-green to dark-green leaves that form a rosette. The base of the plant is brown with leaves that mirror a grouping of pine needles, tall and grassy. Easy to grow, this Tillandsia is drought tolerant and requires only a moderate amount of light. 6. Tillandsia streptophylla: This species is native to Central America and Mexico and has thin, green leaves that turn red when blooming. Nicknamed the Shirley Temple due to its curling leaves that mirror her curly hair, the Tillandsia streptophylla is a stunning air plant collected by many. It thrives in low-humidity areas due and has light pastel green leaves with a fuzzy texture. In dry conditions, the leaves will curl into tight ringlets. Shake out your plant after soaking to avoid rot. It prefers bright, indirect light, so placing it near a window is suggested. 7. Tillandsia brachycaulos: This species is native to Mexico, Central, and South America and has short, thick green leaves that fan outward from a central growing point. One of several species that completely changes color in bloom and will blush and hold a red color year-round with partial light and humidity.  This variety of Tillandsia grows in size each subsequent generation.  A small air plant, the Tillandsia brachycaulos grows to an average h of 3" high by 4" wide. Prefers indirect light or filtered light and shade. 8. Tillandsia tectorum: This species is native to South America and has thin, green leaves that turn red when blooming. The appearance of this large, fuzzy Tillandsia has made it a popular choice for beginners and long-term enthusiasts. Unlike other Tillandsia, it is important not to soak this variety in water or allow it to stay wet for any time. A regular misting is all it needs, along with bright light. 9. Tillandsia caput-medusae: This species is native to Central and South America and has thin, curly green leaves. The Tillandsia Caput Medusae is named after the Greek Goddess Medusa because the plant resembles her hair of snakes! The leaves of the Caput Medusae are smooth and grow upward from a bulbous base. Native to Mexico, Costa Rica, Guatemala, and Panama. That is our list of the ten most popular tillandsia varieties collectors grow and tips on caring for them, so they thrive.

Tillandsias are ideal plants for decorating your home or workspace.
Air plants are a great addition to any home, office, or plant enthusiast's collection. Their size and ease of care make them perfect for small niches, bathrooms, and hanging installations. On work desks, on nightstands, or on a kitchen windowsill, you're sure to appreciate the added novelty air plants bring to your home. Check out our air plant collection and accessories to learn more about how you can find the perfect option for your home or office. Our Hillcrest retail store stocks a large selection of air plants to choose from as well.

Whether your a plant daddy or have a brown thumb, there is much to know about houseplants beyond their name and if they like...

Let customers speak for us

Sent this beautiful bouquet to my fiancé in the hospital.
She said it really brightened her day and brought her many smiles!
Thank you 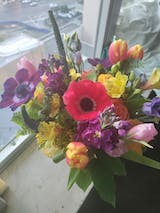 My friend loved her flowers! She said they were so thoughtful and beautiful and I have to agree. These flowers were beautifully arranged and presented well. I appreciated the artistry and creativity of it all. Will be back again!

Thanks for the quick delivery and beautiful flowers. My wife loved them

I sent this as a gift. She was thrilled! Described it as beautiful and fragrant. The order and delivery process was easy and on time, very professional!

Every order has been exactly as promised....make that above and beyond!
I received an exquisite Green arrangement as a gift. Since then Green has been IT for anything floral. I adore tbeir artistry.